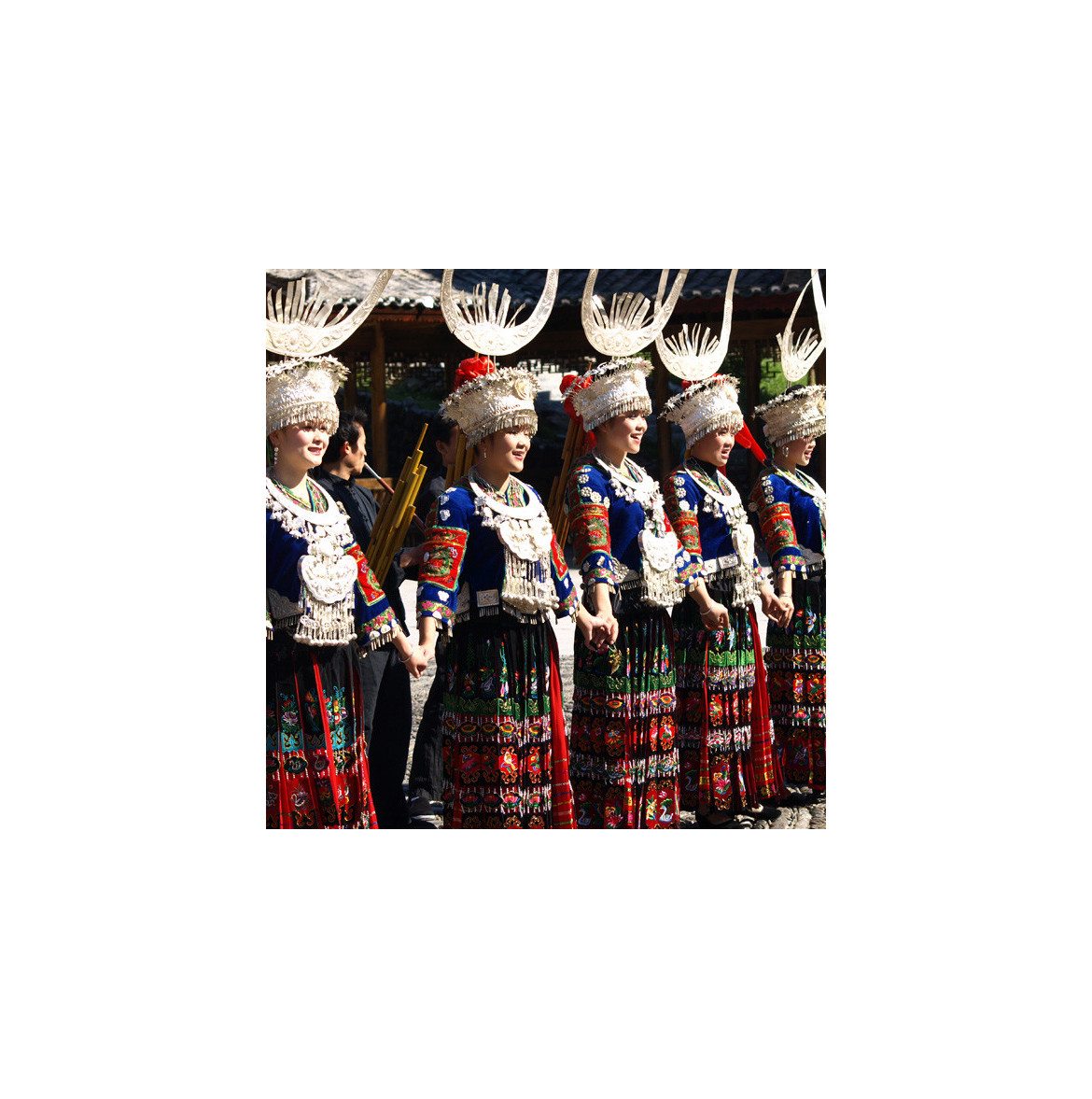 The Miao, whose population goes up to 9 million souls, is China’s 4th largest ethnic minority. They spread throughout multiple provinces of the South-East of China including Guizhou (50%), Yunnan and Guangxi. They are people of mountains which they have sculpted into terrasses to plant glutinous rice, cereales, corn and vegetables.

The Miao, whose population goes up to 9 million souls, is China’s 4th largest ethnic minority. They spread throughout multiple provinces of the South-East of China including Guizhou (50%), Yunnan and Guangxi. They are people of mountains which they have sculpted into terrasses to plant glutinous rice, cereales, corn and vegetables. The character which represents them, 苗, combines the radical of grass 艹 and rice fields 田 thus designating them since ancient times as a people of farmers. Their favorite animal is in fact the water buffalo, to which they have dedicated to a veritable cult, and of which it is not rare to find an icon at the entrance of villages. According to legend, the ancestor of the Miao was a buffalo himself…

Chinese records bear witness to the presence of their ancestors in the medium bassin of the yellow river (Huang He) 4000 to 5000 years B.C. Pushed back by the wars between the Hans, they slowly migrated towards the South and Guizhou, later colonized by the Chinese, which was for a long time a sanctuary of their culture. During their exodus over centuries, the Miao were divided into little communities and isolated, which explains the great diversity in languages and customs which characterise these people. Great revolts against the central power punctuate their history. Some of these like the Revolt of the Taiping in the 19th century, pushed the Miao towards Laos, Vietnam and even up to Thailand where they are known as the Hmong.

Because of there being from the mountains where forests are abundant, the Miao build their houses from wood. Traditionally, the ground floor is strictly for the storage of agricultural tools and the ranching of family pigs, chickens and sometimes cows. The first floor is thus kept for the residence of the family, and rice harvests, conserved in wreathes to defend them from insects, are stored under the roof built by firs or slate.

The Miao have always resisted assimilation by the Chinese culture, favoring their remoteness. Even Mao Zedong had to renounce attempted to enforce them to switch their traditional outfits for the famous Mao costume. For this population void of writing, their embroideries which adorn principally womens costumes are a testimony to their history and their culture. This art of fabric, embroideries and batiks, is recognised thousands of years before our own era, texts boast about the commercial exchanges between the Miao and Han of their fabrics. The women make themselves their clothing with cotton which they dye with indigo to give it those dark colors. Blues, black or brown are accomplished by adding a bit of beef blood to the indigo. The fabric is then hammered, which gives it a silken aspect and makes them more resistant. Embroideries and ribbons elevate the costumes, which are different from village to village. The extraordinary variety of patterns and points used gives us the measure of the richness of their art.

The Miao are a naturally optimistic and happy people. They like to laugh, sing, drink and party. Guizhou is actually nicknamed the “land of a hundred festivities” so much the Miao have so many festivities: new year, festivities of sisters, feast of harvests, festivities of the dragons boats, festival of Lusheng, singing contests … During these occasions women dress up in their festival outfits and kilos of silver jewellery, tiaras, necklaces, earrings, cuffs … passed down from mother to daughter.

In spite of their cultural richness, most of the Miao villages are still in subsistence economy and many are those that are at the limit of food autonomy. This weak quality of life pushes many young Miao towards the cities where they find jobs, with the consequence of a progressive loss in ancestral knowledge, including traditional chants and techniques nonetheless recognised in goldsmithing and embroidery. What will probably save the Miao culture from being forgotten, is paradoxically tourists, more and more plentiful, whose interest in authentic cultures is growing and who are hungry to discover traditional festivities high in colors!